Our retail store is closed Saturday, July 4th for the holiday. Learn more about what to expect when visiting our store. Dismiss

Today Sony announced a 24mm f/1.4 G Master lens for Sony E-mount cameras, including full-frame cameras like the a7 III, and a7R III. A 24mm f/1.4 for full-frame E-mount cameras is exciting all on its own, yet Sony has upped the ante with some great features for a prime lens. The biggest feature of the new 24mm f/1.4 is its size and weight. The lens is smaller and more compact than most of its competitors. It weighs just under 1 lb.. In addition, the lens features a Direct Drive SSM motor for extremely fast autofocus. When not looking to autofocus, like when shooting video, the 24mm f/1.4 has a linear response focus that resembles mechanically coupled focusing for a great feel.

The new lens will cost just under $1,400, and will be available near the end of October. The lens can be pre-ordered starting tomorrow, and a link for pre-orders will be provided below starting then. 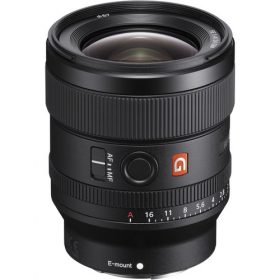 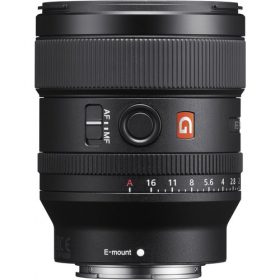 New Large Aperture Wide-Angle Prime Lens is the most compact and lightest in its class[i] , with superb sharpness even at F1.4

Expertly engineered to deliver best in class performance across all aperture settings, the new FE 24mm F1.4 GM (model SEL24F14GM) utilizes Sony’s most advanced optical technologies to satisfy the needs of the most demanding photographers. The new lens is the most compact and lightweight in its classi, measuring approx. 3.0 inches x 3.64 inches and weighing only 15.7 ounces, with a filter diameter of 67mm. Built to meet the strict standards of Sony’s flagship G Master series, the FE 24mm F1.4 GM offers exceptionally high resolution and beautiful bokeh, two qualities that are signature attributes of the G Master brand.

“We are continuing to evolve our lens lineup to maximize the power of our innovative α camera lineup, ” said Neal Manowitz, vice president of imaging solutions at Sony Electronics. “The new 24mm prime brings an exciting new perspective to our flagship lens series. With its incredibly lightweight design and signature G Master quality, our 30th native full-frame mirrorless lens opens up a new world of creative opportunities for today’s photographers, videographers and multi-media creators.”

Realizing consistently high resolution across the entire frame, even at F1.4, the FE 24mm F1.4 GM boasts a new optical design comprised of 10 groups with 13 elements, including two XA (extreme aspherical) and three ED (Extra-low Dispersion) elements. The incorporation of two XA elements effectively suppresses sagittal flare[ii] to ensure that point light sources like distant stars can be accurately reproduced, making the FE 24mm F1.4 GM a compelling proposition for astrophotography. For impressive clarity, Sony’s unique Nano AR Coating is applied to reduce lens flare and ghosting, even in landscape shots where the position of the sun can be problematic with a normal lens.

This outstanding performance is packaged in an extremely compact and lightweight body weighing it at only 15.7 ounces, a welcome relief for landscape or adventure photographers that are hiking, climbing or traveling over long distances. This advantage is further compounded when the FE 24mm F1.4 GM is paired with one of Sony’s award winning α7 / α9 cameras. The lightweight lens design has been realized in part by the development of a new high power DDSSM (Direct Drive SSM) that delivers approximately three times greater thrust than the previous focus system, enabling fast response, high positioning accuracy and quiet operation for both stills and movie shooting.

This incredible lens is also a perfect complement to Sony’s APS-C sensor mirrorless cameras such as α6500 and α6300, and brings the total number of native Sony α E-mount lenses to 48[iii].

In addition to its landscape and starscape shooting abilities, the FE 24mm F1.4 GM also has excellent close up performance of 0.24 meters (0.79ft.) and delivers soft and natural bokeh, a feature that is common across Sony’s entire G Master series of lenses. This is achieved by extreme control over factors like spherical aberration, and axial and lateral chromatic aberration, at the design and manufacturing stages, as each lens is individually tested and adjusted to achieve maximum performance.

The FE 24mm F1.4 GM also includes a number of professional controls that aide ease of operation for both stills and movie shooting. These include an aperture ring that allows direct, intuitive aperture control, and a focus ring that features Linear Response MF for fine, responsive manual focus control. There is also a customizable focus hold button, and a focus-mode switch that makes it possible to quickly select auto or manual focus to match changing shooting conditions.

[i] Compared to other full-frame 24mm F1.4 auto-focus prime lenses. As of September 2018 press release, based on Sony research [ii] A phenomenon that results in an unnatural spreading of point light sources that appears somewhat like a bird spreading its wings and becomes more pronounced towards the image periphery. It is most common in large-aperture lenses [iii] Including converters, excluding discontinued models

Latest Posts
Recent Comments
Tag Cloud
2.8 17-28mm 70-180mm 200-600mm a7r iv alpha backup camera Canon d780 deals digital dslr EF-EOS R Mount Adapter EOS R EOS RP fe full frame images lens mirrorless new nikon olympus organize photos sale sigma sony tamron trade trade-in trade-up z6 z7
Categories
Archives
Save & Share Cart
Your Shopping Cart will be saved and you'll be given a link. You, or anyone with the link, can use it to retrieve your Cart at any time.
Back Save & Share Cart
Your Shopping Cart will be saved with Product pictures and information, and Cart Totals. Then send it to yourself, or a friend, with a link to retrieve it at any time.
Your cart email sent successfully :)